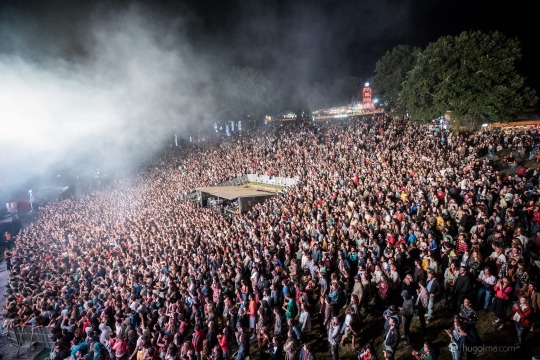 While you are here, grab our printable festival schedule: PDF or XLS format. You might have to download the Gotham font to make the editable Excel file work properly. And scroll down to the end of this post for our special playlist, featuring a selection of 30 songs from artists playing in this year’s edition of the festival.

Our highlight from the O Festival Sobe à Vila segment, running from the 10th to the 13th, has to be the mythical Parkinsons (Tuesday, 13, 23:30). The Portuguese punk rockers from Coimbra who made a name for themselves in London will set the village on fire (figuratively; this country has had enough forest fires, no thanks). 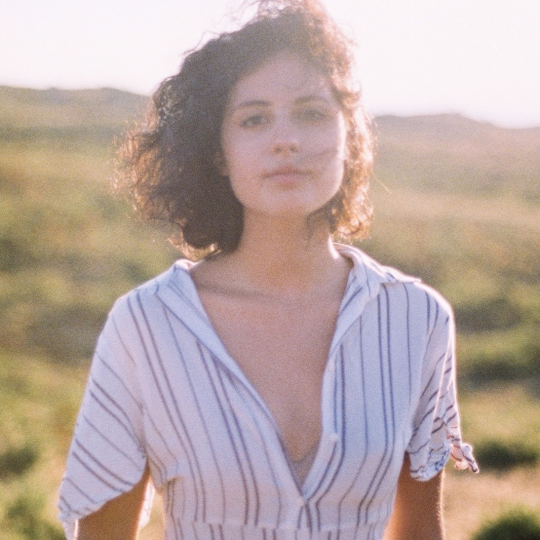 During the days of the festival, next to the camping area and the small river that runs through it, the Jazz na Relva stage will be pretty active before festivities start in the main stage, with free yoga lessons, book readings, debates and a few (mostly) acoustic shows. Our pick for this year is the newcomer Mathilda, moniker of singer-songwriter Mafalda Costa (Thursday, 15, 15:00). She will be presenting some of the delicate folk songs from her forthcoming debut album, Changing Colours, out September 10th, along with label mate Diogo Alves Pinto (Gobi Bear). Too bad we won’t be there because the people demand eurodance and so we have to work, but you should. 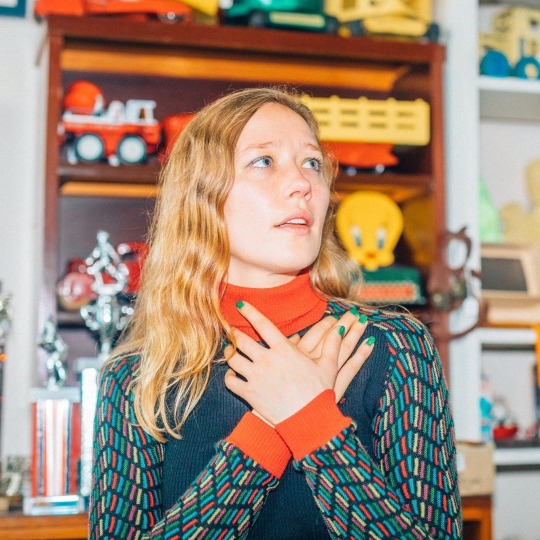 The main programme starts Wednesday. Our highlight for the first night is, of course, our beloved Julia Jacklin (Vodafone stage, 19:40), who performs for the first time for her Portuguese fans (and we’re delighted to say there are quite a few of us). The Australian indie-rock-ish songwriter will bring her band over to present her sophomore album, Crushing, along with selections off her gorgeous debut Don’t Let the Kids Win. Granted, most people will be there for the National (Vodafone, 00:45) – returning to the festival fourteen years after their first time – but we know people are going to react to Julia Jackson the same way they did last year with Big Thief while waiting for Arcade Fire. Later that night, the Congolese collective KOKOKO! (Vodafone.fm stage, 02:25) will shake things up with their instruments made out of rewired and up-cycled materials found in the streets of Kinshasa. 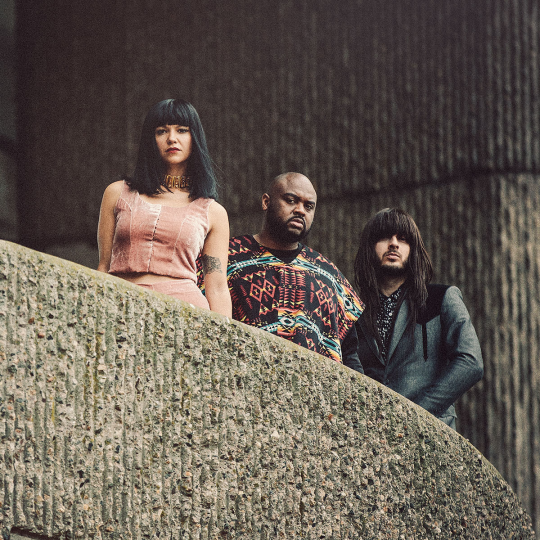 On Thursday, the first full day of the festival, a couple of old favourites take the stage again: Car Seat Headrest (Vodafone, 21:10) return to where they last played two years ago, and New Order (Vodafone, 22:50) play their only second show in the country after debuting fourteen years ago at the Super Bock Super Rock festival. Debuting this year for Portuguese audiences are Khruangbin (Vodafone, 18:15), Alvvays (Vodafone, 19:50), Stella Donnelly (Vodafone.fm, 19:05) and Boy Pablo (Vodafone.fm, 20:30). The first have just released an album consisting of reworked dub versions of their second album Con Todo el Mundo and finally reach the country after successful tours in Europe and elsewhere. We first saw them opening for Father John Misty in his 2016 European tour and Dutch audiences loved them so much they played over ten shows in the country over the past three years. It might be the beginning of a similar love affair between the Paredes de Coura festival goers and the Texan trio who merges Thai funk, surf rock, classic soul and psychedelia. Alvvays are one of the most sought after indie pop bands of the past few years, especially after releasing their earworm-packed second album Antisocialites. Covering up for Julien Baker’s last minute absence is the Australian Stella Donnelly, fresh off the release of her debut record Beware of the Dogs. Sorry, Julien, but we think the lineup just got stronger. Last but not least, the announcement of Boy Pablo was highly celebrated by fans of the festival. The Norwegian jangle-ish pop band fronted by a boy named Pablo takes the smaller stage at dinner time, in a day that is much more than just a big warm up to the New Order gig. 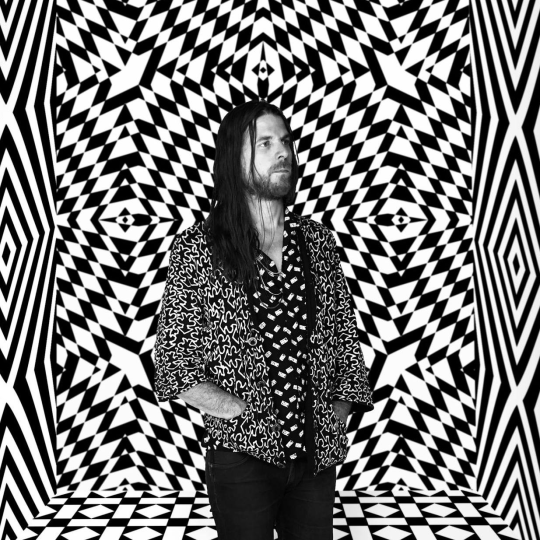 Friday will probably the best festival day in recent history. Father John Misty (Vodafone, 00:45) returns to the festival as a headliner four years after a fantastic show, and he’s not alone. His producer and collaborator Jonathan Wilson, (Vodafone, 19:25) pivotal musician in the LA recording scene, plays his first show in the country, some ten years after we’ve turned fanboys when discovering Frankie Ray in some obscure guitar forum (can someone reissue this, please?). Returning after a lukewarm show at the Alive festival back in 2008 are Spiritualized (Vodafone, 22:50). The distorted guitars of the English giants are much more suited for the natural amphitheatre of Paredes de Coura, and judging from a recent show, we’re in for a treat. Just don’t forget the light show. EDIT: How the fuck did we forget they played NOS Primavera Sound twice while writing this article? At the Vodafone.FM stage, and after a supposedly memorable show last year in Guimarães, Black Midi (20:30) present our top guitar album of the year, Schlagenheim. The young, enigmatic London band are our current bet for “band that will eventually replace Shellac of North America in our hearts if they ever stop playing” and we’re too goddamn excited to see them present their debut. 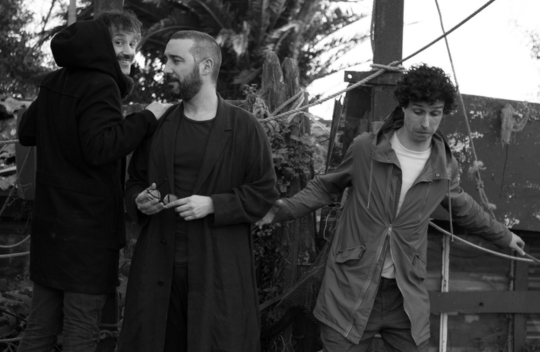 Saturday is the more relaxed and least guitar-heavy day of the festival. Our top Portuguese pick for this year’s festival is Sensible Soccers (Vodafone.fm, 20:40). It’s been a privilege to follow their career, from their humble beginnings as a home recording, netlabel act eight years ago, to their status as one of the most interesting bands coming out of Portugal at the dawn of the third decade of the 21st century. After a few lineup changes, guitars are now a thing in the past, and the bass/synths/percussion trio is now aiming for space. A few months ago, the prospect of seeing Mitski (Vodafone, 19:35) live wasn’t as urgent as it seems to be now. In the eve of a (hopefully not long) hiatus, this is the last chance in a while to see the songs of Be the Cowboy, Bury Me at Makeout Creek and Puberty 2 live on stage. In a day where Suede, Freddie Gibbs & Madlib and Patti Smith might draw the biggest crowds (and need no introduction), our top pick for the day is Kamaal Williams (Vodafone.fm, 22:20) representing the burgeoning London forward-thinking jazz scene. The Black Focus Records label owner is back after only a few months, having performed in Cascais last April, and his blend of experimental electronica and cosmic contemporary jazz is the perfect counterpoint in a festival still largely dominated by – more often than not great, mind you – indie rock music. And we’re already counting the hours.