Ah, Optimus Primavera Sound. It’s been already a month. From now on it will be way slower the time passing by to the next edition, already confirmed to take place at the simply perfect Parque da Cidade, Porto, from May 30th to June 2nd. Really hard to wait, you say? Don’t you worry, it looks like the Autumn version of the festival, the Primavera Club will also take place in Portugal this year! Take note: November 30th through December 2nd in Guimarães, European Capital of Culture in 2012. How cool is that?

Moving on, if you haven’t been to Primavera but wanted to know all that happened, you realized that there aren’t many reviews from the last day. Not hard to figure why: venues with limited space, a lot of people who left Porto earlier and so on. As for Bolachas?

Yep, I was one of the lucky ones who got a ticket for Olivia Tremor Control and Jeff Mangum at Casa da Música. (Actually forget luck, I went earlier to the festival site, waiting in the line for those golden tickets who assured entrance to these shows. Took me about 2 hours for one of it to be in my hands, but people by the same place in line as me even managed to get it faster, due to the fact that there was the waiting line to get in the festival and then the actual line for the tickets, and by the entrance the inspection was divided by gender and the girls were quicker and ok fuck that, I got it and you didn’t, moving on)

By the reaction of the crowd, it seemed that the Olivia Tremor Control concert was being amusing. Well it wasn’t. It wasn’t just that. It was, also, incredible.

Six musicians – only the drummer, I think, played the same instrument all along – who knew their shit, some of them very talented. And by “some of them” I mean the bassist. When he wasn’t the violinist. Or when he wasn’t the oboe player (oboist sounds awful but so it is). Also, he looks a lot like with me, which explains all the delighted chicks on the crowd. And that is the last time I’ll go personal, sorry again for that.

I’m the blue one.

By this point everybody can assume this was intense. And sure you’re right, OTC playing song after song with little or no interval in between. All great songs, very characterized with that Beach Boys vibe, thank you all for singing (musicians!), but also fearless in experimentation and tripping balls. Yes, I’m talking to you, Mike Love. Pussy. 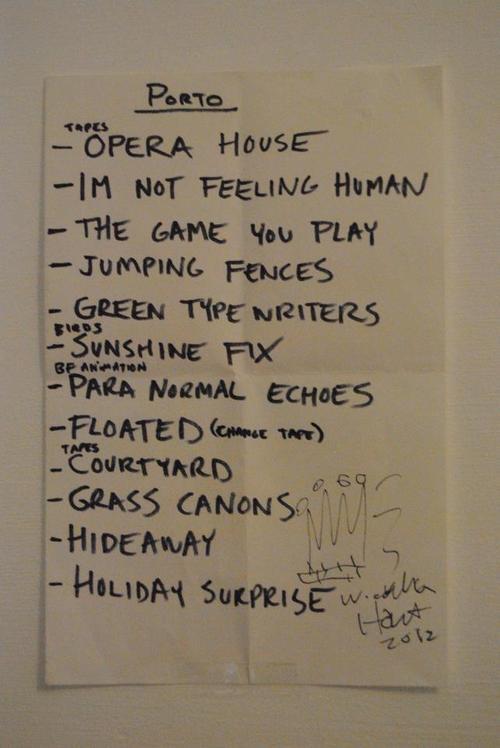 Many thanks to Rita, a strong lassie on fights for setlists

This noisy and carried away part got a lot intense by the middle of the concert, approximately, much like in their acclaimed last work, Black Foliage: Animation Music Volume 1, back in the days. And also lots of songs from this one (setlist above), for example “Hideaway”, making me shake my head like it was a dog’s tail who just saw his owner arriving home, or “I Have Been Floated”, ear friendly chorus and IS THAT JEFF MANGUM? Oh yeah, just before the 2nd chorus, there he was, the former member of OTC, joining them on stage, for the rejoice of the fullpacked crowd of Mangum’s fans.

Few more headshaking moments and then realizing the concert was about to finish, in little more than 60 minutes I think, wasn’t paying attention as you’d imagine. And what can I say? Well, let me put into this: if I had gone to this as a hardcore fan of the band, this right here would be the best concert of Primavera 2012. But now I’m becoming one of those nuts, I’m converted. As if the beauty of discovering and enjoying unheard bands by attending clueless one of their shows wasn’t enough. Loved it. 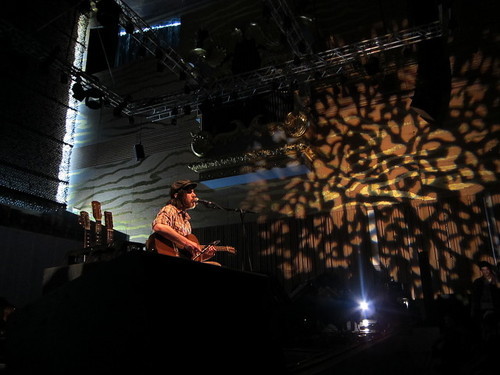 So, what about Neutral Milk Hotel? Jeff Mangum, whatever. This one was special, as you might have guessed, due to popular demand, he had to play another concert by four o’clock for those who couldn’t make it to the evening show. Hardcore fans attending those two didn’t regret it for sure. I also heard that the afternoon one missed to “sold” out, which is a shame. As I already mentioned, the venue was fullpacked, opening seats for the orchestra countertop in the back of the stage and also in the balconies.

Uff, so much I could talk about. In fact, fuck it, I’ll just stay short in words. There’s no way I could add anything more to the satisfaction of the fans, it was a dream who came true to a lot of those people, checking their indie idol just three feet away. Oh yeah, Jeff sent a big “fuck you” to Casa da Música and invited the people to get up and go to up front and some even sat on the stage by his side. Screw you, benches (no pun intended). Can you already imagine all the fans hysteria? (PS: Olivia Tremor Control also deserved this, you people)

As for the non-fans, which were not a few I risk to say, me in part included… I’m quite bipolar to Jeff Mangum songs, some I think are marvelous, others crap, others just fun. But in the end? Most his set was composed of songs from the first batch. It was pretty good, indeed. I caught myself singing to some songs (Jeff allowed us to sing along some tunes, don’t beat me) and even the ones I definitely don’t like were cool. Totally worth it. Thank you very much for “Naomi” and a handful of other greats, man. Go die in peace, Mangum’s people (compliment).

So is this how it ends?

No funking way! Bad joke aside, there I was, moving from Casa da Música to Hard Club to check Kindness, with, I can almost swear, the other only 3 people who did this. While it sounds like no one cared about this option for the last day of festival, I’m just going to say that it was actually worse than Jeff, in terms of space to move. Seriously, I had never seen Hard Club’s Room 1 so full, and it’s the Porto venue I most visited. And there’s an easy explanation, which we concluded soon we got there: since the shows were free and the ticket to them was obtained right there, all the foreign people who couldn’t attend Mangum’s shows or even couldn’t care less showed up. And thank you, it was a blast. Kindness are still young as a band, but their ways to make you groove are way back to the days, and their final product isn’t quite antiquated. A charismatic frontman, which best job is to go through the crowd with a tambourine from the stage to the exit door, only noticeable when he’s meters from you (seriously, mindfuck of the day, he’s tall and long haired, how come he just shows up when he’s already in front of you?!), two hot chicks doing choirs and even assuming the lead sometimes, sweet bass, sweet guitar, sweet keys and holy shit the drummer! What an animal. Completely stole the show.

Their two top hits “Gee Up” and “That’s Alright” didn’t miss, of course, and even came back in the encore. That was the worst think I can remember from the show, but nevermind, got a chance to see that drummer do a solo and, fuck this, destroying the set with a little help from the leader. And that’s how you close the best urban festival to take place in Portugal. It will be a hard year mssng Primavera.